Transparency and Communication in Sherwood Glen

If you ask condo owners from around the country what their biggest complaint is when it comes to the Board, I would bet a week's pay that a lack of transparent and a lack of communication are at, or near the top of the list. It's no different here at Sherwood Glen, and I want to stress that the complaint is NOT a new one.

They say a picture is worth a thousand words, and so I offer this graph that will serve a jumping off point to give you a bit of history of conflict and conflict resolution here at Sherwood. I'm sure that simply looking at it will give you some significant insights. I could go on for many pages, but I'll try to be brief. 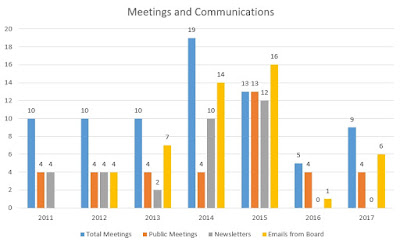 The chart begins in 2011, because that's when I first began serving as a board member and when we started building an online presence. Prior to that time, all communication between the board and the community took place at the quarterly meetings and associated minutes, thought the minutes of meetings not open to the public, and quarterly news letters, all of which were posted on the bulletin boards.  This was common in many associations.

Things began to change in June of 2010, when MySherwoodGlen.com was launched. Information was provide there and through email. The board realized many of the residents were not online and anything that was posted electronically, was also posted physically on the bulletin boards.

Despite these additional channels, there was still an undertone of discontent and the board members elected in October 2013, wanted to make transparency and communication a high priority item. To that end, 2014 saw a dramatic increase in board meetings, bulletins went from quarterly to monthly. Email and posted updates filled the spaces in between. Things improved, but the board felt they could improve more.

There were long and serious discussions about the by-laws and nature of meetings, which will be an important topic in a future post. We came to realize that our board and every previous board had made errors in the way meetings were conducted and advertised. The errors centered around properly advertising meetings, but because the board was very aware of the need to follow proper procedure when conducting meetings, votes, and documenting actions taken, the errors were of minimal impact or concern to the membership. Though not follow to the letter, by-law were followed in spirit and intent.

Moving into 2015, the board scheduled 10 monthly meetings, all of which were open to the public.  As other meetings became necessary, they were added and were also public. In an effort to be even more transparent additional bulletins and email updates were created whenever there was enough information to publish.

Up to this point in time, all of the boards were composed of a good mix of veterans and novices, but in 2016, things changed as an inexperienced board took over the helm. This resulted in a reversal of the communication and transparency trend that had been established over the past years. Matters were compounded when mistakes were made that were significant violations of by-laws and the New Hampshire Condominium Act of June 2016. I feel this was due to a lack of experience and a failure to embrace the lessons of the past and expertise that was available to them.  However, the net effect was a perception on the part of the community that they were not being considered in decisions that impacted them directly.

I'll refrain from going into specifics here, because it serves no useful purpose. I'll simply express my hope that the communication trend established in 2014-15, will be embraced by the current board and that they will tap into the expertise and experience available here in the community.