We have to age, but don't have to grow old!

As many of you know, Peter and Nonal Hubbard put on a demonstration on how to get the most out of our fitness center, but it was more than that.  Peter's approach to fitness for the our 55+ community is really sound.  It focuses on strengthening all muscles with an emphasis on core muscles, and it's very doable with the equipment in the fitness center.

His philosophy stresses that it's not about the weight you lift.  It's about being able to lift your grandchildren when the time comes. You have to age, but you don't have to grow old.

The video below is intended to do two things.  First,  it will serve as a refresher for those of us who attended, and it will give other viewers a flavor of what the workshop was about.

The video is NOT intended to be instructional.  It doesn't contain safety tips, amount of weight, frequency, and dozens of other things provided during the hour. 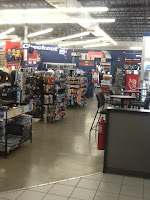 When I lived in NJ, I went to the same tire dealer for more than 20 years. Now that I live in NH, I was concerned about finding a reputable dealer here in NH.

After pricing tires online, and checking with my dealer back in NJ, it looked like Pep Boys in Manchester was the best deal. They were running a buy 3 and get one free deal with a mail in rebate.

The next thing I did was to check reviews on Google and Yelp. Most of the reviews were scathing. However, having worked in retail, I knew that you have to read between the lines. People who have good experiences are far less likely to write reviews than those who have bad one. Some bad ones seemed legitimate, while others were sour grape or nut cases.

I came to the conclusion that this was probably not the place to get serious work done, but I have a lifetime warranty on my car and have all work done by Chrysler. Since this was just tires, I decided to give them a try.

I made my appointment and was told to ask for Mike when I came in. That put up a red flag which suggested commission sales, and I fully expected to experience some up sales attempts.  People may get annoyed at this sort of thing, but it's business and as long as they aren't trying to sell you something you don't or won't need shortly, I can live with it, because I know enough to tell whether I really need the item.

When I arrived, Mike took care of me quickly and professionally. He told me that it would take about an hour. They has free Internet, so I went over to the waiting area and began writing this review.

The car went in immediately, and shortly thereafter, Mike came out and said that my tires were badly wore on the outsides and that I suggested a front end alignment.

Here's where it was important that I knew about cars. I knew this was an attempt to sell me something I didn't really need. Yes, they were badly worn, but I knew the reason was my lack or diligence in keeping them inflated.  The fact is that the wear was even on all four tires.  Anyone who understands tire wear due to improper inflation vs alignment problems, would see that.  However, I don't really fault them for making the attempt.

To Mike's credit, after I explained my reason for not wanting an alignment, he made no further attempt to convince me and didn't attempt to up sell anything else.

Less than a half hour later, the car was done.  However, since I needed tires because of my lack of attention to tire pressure, the first thing I did was to check the pressure. According to the tire pressure readout on the car's computer they were over inflated.

I took the opportunity to have them check the pressure so that I could compare the computer readout to the manual check.  It turned out that they were over inflated, by a few pounds.  In their defense, because of the wear, I had them over inflated when I bought them in and that might be why they added a few pounds.

They had the best price, but until I checked out, I didn't realize that they offered free lifetime rotation and balancing every 6000 miles.  I already had cheap $15 rotation and balance through Foss Motors, where I bought the car. But free is much better than $15 and it will result in about a $150 saving over the life of the tire.

With all things considered, I was pleased with the experience.

Visit to Wellfleet and Provincetown

The day after Memorial Day, Jill and I headed to Wellfleet, MA. My sister and brother-in-law were visiting their friends John and Susan, and we took the opportunity to visit with them. John and Susan were gracious enough to invite us to sleep over, which allowed us to have a very relaxing and enjoyable visit. After settling in to our temporary digs, John drove us all to take a look at Provincetown.

I took a few pictures and turned them into the video below. They in no way do justice to the town, because we weren't there long enough and I only took a few shots, but I'm posting it for a reason.

In the last few frames, you'll see some pictures of what appears to be a houseboat moored in the harbor. I didn't have a chance to talk to any of the locals and I'm curious as to whether there might be an interesting story behind it. If you can provide any information, that would be cool!

This is just a little slide show of some of the animals around the pond at Sherwood Glen. Almost all these shots were taken in the past month or two. There are two or three from last year.