We rolled into the village of Hillsborough at about 5:00 and the balloons were scheduled to launch at 6:00. Jill was hungry. So rather than settle for typically over priced festival food, we pulled into the Hillsborough Diner, which sat directly in front of the festival field.

I ordered a 6 oz. burger and Jill had a roast beef, both of which came with chips and didn't look very impressive. Jill's bread was stale, but my burger was a complete surprise. I like my burgers rare, but ever since the mad cow disease scare, finding a place that will give you anything less than medium is next to impossible. I ordered medium rare, hoping to find at least a tiny bit if pink. When it arrived, it was definitely at least a 1/2 pound and not only was there pink, it was rare and tasty. Live free or die! A real winner!

We walked outside and the owner of the diner was charging cars $5 each to park for the festival, but because we ate at the diner, we parked for free. Things were working out pretty well. 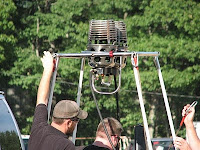 It was almost 6:00 as we walked to the festival grounds. When we got there, it was obvious that the launch was going to be delayed. None of the balloon were prepped and this one was the only on that had any action at all. So we strolled around the grounds visiting the carnival and concessions.

At 6:30 we headed back to the field to see if thing were further along, but they weren't. The word was that the winds were between 10-12 mph, which might be great for kite flying, but hot air balloons was 4-6 max.

At about 7:15 we saw the first balloon go up, but it wasn't anything to write home about. It was just this tethered helium balloon to test the wind strength and direction. At 7:30 they announced that the launch was being canceled, but at dusk they would do a moonlight tethered light up of the balloons.

Two more hours in the grass would have wreaked havoc with our backs, so we decided to call it a day. We were disappointed, but the drive was beautiful and for me, the hamburger was worth the trip.

We'll probably give it a try again next year, but I know now that the real launch time, even if the weather is perfect, will probably be around 7:00. I already know where I'm parking and I'm going to have for dinner.
Posted by Art at 11:02 PM No comments: