Jill and I both love soft serve ice cream. For the first few trips, the closest place we could find was the Brick House in Hooksett, but then Jill read about Applehurst Farms. They are a former dairy farm in Epping on Old Red Oak Rd.

Aside from vegetables, meats, and a "junk" shop, they have 9 different flavors of Edy's soft serve ice cream. Everything is on the honor system. You serve yourself and put the money in a fire hydrant.

On Saturday during the summer and Saturday and Sunday during the Winter and Spring, they make fresh donuts that are fabulous. They come in plain, apple, or either one with cinnamon sugar. YUM! 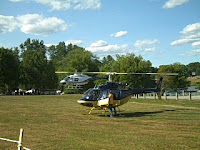 The first thing you see when you arrive at the Pittsfield Ballon Festival is a lot of helicopter activity from the three or four copters that were giving fair goers a spin around the lake at tree top level. It was an impressive beginning and I was glad that we arrived early enough to explore the grounds before the launch time.

There were dozens of food vendors, enough to overjoy an over-sized carnivore with a sweet tooth. I had a cheese steak and a Coke. Jill had chicken fingers, fries, a Coke and later, some cotton candy. All of that amounted to a $20 bill. The price wasn't a bad, especially considering the size of the portions. They were tastier and much more substantial than I would have expected. I would have happily paid that amount at a local eatery.

After eating, we headed to the launch field and set up our folding chairs. We had at least a half hour to kill. While Jill sat with our stuff and watched the activity (or lack of) on the launch field, I strolled over to the bandstand, where RockUs, a local band was bringing back memories with a set of oldies. I hung out for a few songs and headed back to Jill.

It was now past launch time and it looked like it might be a repeat of the Hillsborough non-launch. At 5 AM they successfully launched 20 balloons. However we were attending the 5 PM launch, and things weren't going as smoothly. The wind was in the wrong direction. For some reason, the pilots didn't like the prospect of landing in the mountains.

One balloon, the Irish Rover, did launch. I assume the pilot was either D.B. Cooper or on a more sensible on a short flight in mind, that would land long before they were counting pine needles.

After that, the ReMax balloon flamed up and faux-flew, tethered hovering above the fairgrounds. It was still 20 minutes before the launch window would close and they would cancel. Knowing that the chances of a launch were slim to none, we decided to head back to the car and beat the traffic.

The festival was about 25 mile from home, but the top down ride on Route 107, was so relaxing that it was as much of a pleasure as the rest of the day. We didn't get to see a full launch, but we had a great time and will have the 2011 festival on our calendars.
Posted by Art at 2:48 PM No comments: