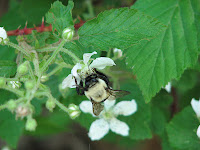 Yesterday, we went on a road trip via GPS. We traveled back country roads and found that when the GPS wasn't telling us to make right turns on to foot paths, it was directing us to drive 2.3 miles through the woods. As a result, we only make it to 4 of the 7 points I had plotted. Today we decided to try to see the other half. We started at point 7 and headed backward. I'm happy to say that things went better today. It only took us down two unpaved roads, but both of them connected to paved roads and unlike yesterday, we were able to get there from here.

Before heading out, I took my daily walk to check on the beavers, the trail camera I set out to catch the ATVer who are trespassing on our property. The beavers were quiet and there were no new signs of ATV incursions, but I did manage to get a few pictures. Our neighbor has a VERY active bird feeder. 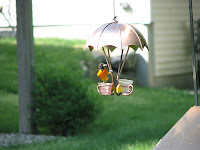 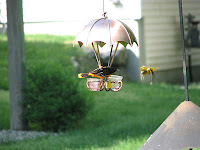 When we went on our ride and Jill and I reaffirmed that we are complete opposites! People are often amazed as how two completely different people managed to stay married for forty-six years. I guess it's because two halves make a whole. The way we reaffirmed it today was through the taking of video.

I wanted to take some video of the car driving down the country roads to give you a feel of what it was like, so I had Jill hold the camera outside the car window as we drive. I told her to hold it high enough so that the mirror and car are not in the picture. After about a minute, I stopped, took the camera and held it out my said of the car. The results of both were a failure, but in Jill's failure, the video was 70% car and 30% road. In my failure, the video was 70% trees and 30% road.

Along the way, there was a beautiful view of a wetland valley. It offered me another opportunity to practice the stitch assistant on my camera. Here's a panorama created by stitching five pictures together. Don't forget to click it to enlarge it! The picture is 1.75 meg and depending on your connection, it might take a few seconds to download.

Shortly after this we were on Griffin Road in Deerfield heading toward Center Hill Road in Epsom. As we hit the Deefield/Epsom dividing line, it turned into a dirt road, but we pushed on and hit paving again on Center Hill Road. From there we went hit Route 4 and the highlight of our day. About a mile or two down Route 4, going toward Concord, on the right hand side we saw a large collection of wood sculptures of all shapes and sizes. A grabbed my camera, but as we got out of the car, we saw the "No Pictures" sign. So I put the camera down and we entered what can only be described as a magical tour into the imagination of an amazingly skilled artist. Hundreds of tree trunks had been turned into whimsical and comical animals. There were caricatures of bears, people, moose, beavers and all kinds of other wildlife inside and outside small buildings and along the streets of of this wood-animal community. Andy, and his son are the artists responsible for this wonderland. Like his sculptures, Andy had a smile on his face and a gleam in his eye when he talked about his work. As I shook hands with Andy, it was almost like shaking hands with one of his wooden creations. They were hard, calloused, and powerful from years of wood carving. I want to get back to talk to him in greater length and try to convince him to let me make a little documentary and post it here. 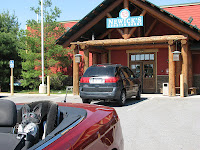 We couldn't take any pictures, but we did buy a bird house and I can take all the pictures I want. Here it is strapped into my grandson's car seat at Newick's in Concord where we had some of the best seafood we have had anywhere. 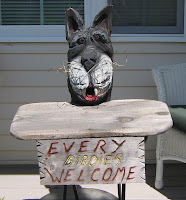 After eating we headed home and put the cat in its temporary home on our front porch. We won't get any birds settling there, but eventually he (she) will make it to the back yard. As you look at the pictures, keep in mind this is one of Andy's SMALL pieces. We have to come up with a name for our cat and if you have any ideas, I'd love to hear them.
Posted by Art at 10:58 AM No comments:

The End of the Road 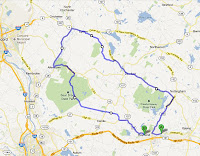 It was a beautiful day today and Jill wanted to take a leisurely, top down ride, on some back roads. So this morning I got on Google maps an scouted out about a 2 to 3 hour ride through Candia, Pittsfield, Epsom, Deerfield, and Raymond. I punched in a half dozen cross streets in my Tom-Tom, and hit the road.

I soon discovered some GPS math. Tom-Tom plus NH back roads equals, you can't get there from here. It had me making turns where there have been none since the revolutionary war. The road may be on the map, but no one told that to the forest that is growing there. It told me that my next intersection was 3.2 miles down a road that only continued for 1.5 mile.

Since we had no real destination and were just out for the scenery, it was really kind of fun. I would just tell it to calculate a different route and it would obediently send us cruising through some beautiful countryside until he hit the next dead end. In between dead ends, we came across some beautiful country and interesting sights. 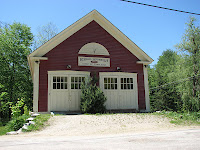 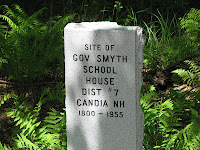 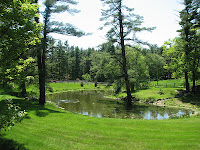 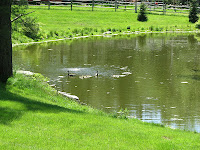 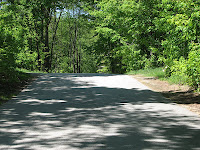 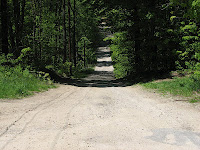 Click on Pics to Enlarge
The car was rolling along the blacktop at a leisurely 35 mph. As the hill peaked, the road surface dropped a few inches and turned from blacktop to gravel. Thank goodness I was doing the speed limit. We literally felt the change before we saw it. If I had been doing 50 mph, it would have looked like something out of the Dukes of Hazard.

I tried (no too successfully) to reproduce the look and feel by applying the Ken Burns effect to the two stills in a short iMovie.

At this point, we decided it was time for a late lunch or early dinner, however you look at it. We headed for the Asian Breeze in Hooksett, for some General Tsu Chicken and Hunan Shrimp. For desert, east to Epping for some soft ice cream at Applehurst Farms and then home.

All in all it was a very nice day, but I learned that I have to keep Tom-Tom on primary or secondary highways.

Paving of Sherwood and Locksley

The Dawg arrived this morning. Well actually, it was Black Dawg Paving company. The majority of time was spent in prepping the blacktop. They did a nice job of cleaning and crack filling. Once that was done and the material had set up enough, they hand poured and spread the blacktop on the porch walkways and the top of the driveways. This video is a two minute time capsule of the spraying from Sherwood to just past 12 Locksley that followed.

As you may be aware, we have had an ongoing problem with ATVs and snowmobiles using the leach field behind the pond for their personal tracks. Aside from trespassing, they could potentially cause thousands of dollars of damage to the leach field pipe system.

We have been calling the police and they are patrolling it periodically. They said they would send their ATV up there if we can notify them when it is happening.

We have contracted to have a chain link fence and gate put up at the entrance of the leach field and today action was taken to block their initial access to the property.

The ATVs have been coming down the power line trail and entering our property in back of the Arrow leach field. A large tree had been placed at the entrance to our trail, but they went around it, through the woods, and across a small gully to our trail.

Today, Chris, one of Kellop's equipment operators, took the excavator and placed rocks to block that access and two other potential access points.

Clicking on this picture will enlarge it and give you an overview of the situation. 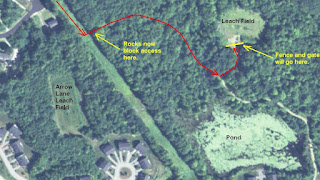