Welcome to Sherwood Sprinklers 101. If you are reading this it is because you saw a news letter, my Facebook post pointing you here, or you reported sprinklers not working and were referred to it me or our management company.

From time to time, I'll get a call about a sprinkler head spraying the driveway instead of the lawn. That person observed the problem, reported it, and a fix can be scheduled.

From time to time, I get a call about a sprinkler head that looks like Old Faithful. That too, is an observed problem that can be addressed

On the other hand, the most frequent and most frustrating calls I get are the ones that say with great conviction, their sprinklers are not working.  I've been working with our sprinklers since 2010 and during that time I would estimate that the people who said their sprinklers weren't working were wrong 9 times out of 10, and I knew it when they called. 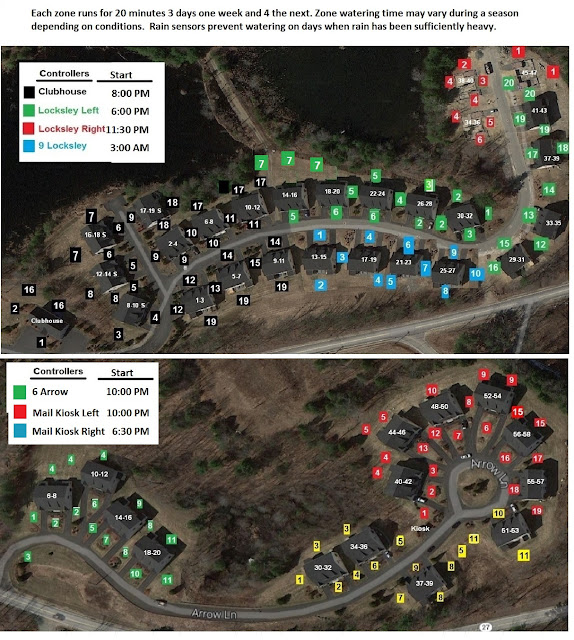 Unlike the first two examples, which are based on what they person saw, the report of sprinklers not working are based upon what they have not seen.

When I was teaching, I would hand back assignments marked incomplete, only to have a student say, "You never told us to ______."  My usual response was to ask them to tell me some things I DID say. After failing to do that, I would say, "If you can't remember any of the things I did say, how can you remember all the things I didn't say?"

My sprinklers are not working fall into that same category.  Sprinklers not on every day and are on for only 20 minutes. On top of that, the majority of the development is watered between 10PM and 6AM. This is only one small part of the complicated system.  Here's the rest of the story.

At Sherwood Glen, we have about 1500 sprinkler heads divided into about 100 zones, and controlled by seven different timers that begin at different times ranging from 6:00 PM to 11:30 PM.
Additionally, starting times and days change during the summer depending on conditions.

Things like power outages can put one or more controller out of sync, if the controller's battery back up is down.

To complicate matters even more, when controller are schedule for every other day. Different controllers handle that differently. With 7 days in a week, it's actually three days on one week and four on the next.

If your neighbor's sprinklers are on and yours are not, you probably don't have a problem, because you may be on a completely different controller and your lawn will be watered about five hours after your neighbor.

If your one part of your unit is active, but another is not, it is probably in a different zone or on a different controller.  For example clubhouse zone 1 is in the front and zone 16 is in the back.

Oh, and somewhere along the line, people have gotten the idea that placing a stone on top of a sprinkler is a good test. It's not. If the sprinkler head was installed properly, the stone will still be there the next morning. At best, it's an indicator that the head is not perpendicular to the ground.

If the irrigation company is called out because of a false alarm, it may cost all of us a $50 charge. So before reporting that sprinklers are not working, please make sure you have done what you can to confirm that to be true.
Posted by Art at 7:54 PM